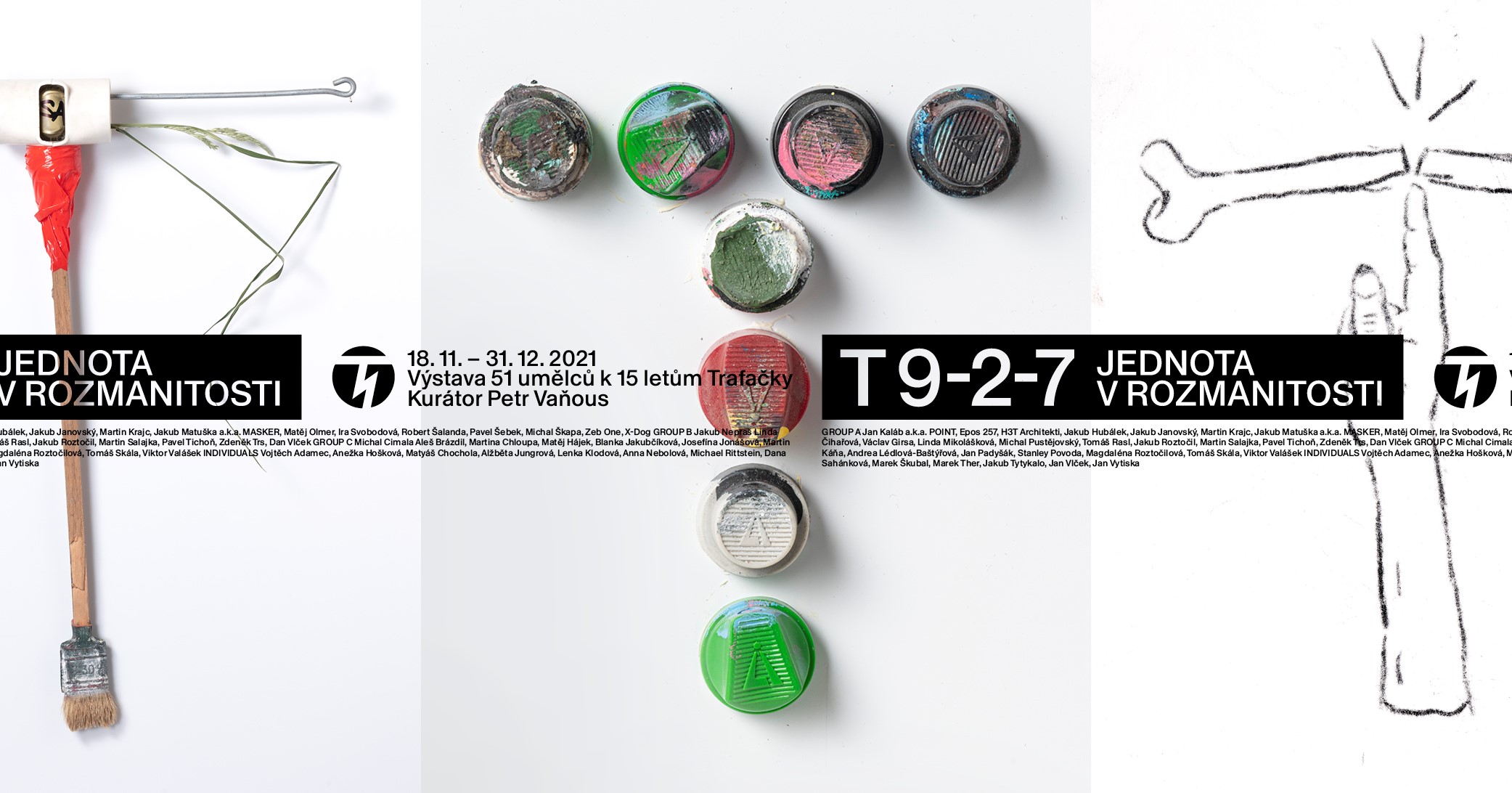 The group exhibition of 51 artists to commemorate 15 years since the founding of the Trafačka art group is based on the principle of three influential groups, which consciously or subconsciously arose in the time horizon of Trafačka’s existence in the former Vysočanská transformer station. The central artists of the exhibition and the founding members of the Trafačka Association, Jan Kaláb, Michal Cimala and Jakub Nepraš, created a surrounding of artists around them, with whom Trafo Gallery worked closely and still works today.

The exhibition with a charitable overlap will start on the national holiday on Wednesday November 17, 2021 since 7pm, when a comprehensive publication summarizing all exhibitors and accompanied by texts by Petr Vaňous, Noemi Smolik, Magda Danysz and Blanka Čermáková and an interview with the founding members of Trafačka will be launched. More information at www.trafogallery.cz.

The community initiative initially called Trafačka consisted of a hard core of artists and organizers (Jan Kaláb, Jakub Nepraš, Blanka Čermáková, Michal Cimala) and many closer and more distant “satellites.” It was a small, temporary galaxy with permeable borders that was constantly at risk of being absorbed by a black hole… Which is what eventually happened.
Trafačka / Trafo Gallery is a unique and continually documentable model of transformation whose motion slowly changes its structure, meaning all aspects of its essence. This basic concept also forms the foundation for this exhibition project, whose main aim is to present the process of transformation itself, which sumamrizes the country’s social transformation with all its key attributes while also reflecting the full range of minor transformational shifts as expressed in the exhibited works of art – from intangible gesture to physical artifact, from the exhibition as a “collective work” to the curator as director, from community initiative to a community-based cooperative that fully takes on the responsibility of joining the ranks of professional galleries in Prague and Central Europe.

The exhibited artists will be presented on the basis of groups. The central core consists of three artists associated with the original idea of Trafačka and with its founding: Jan Kaláb, Jakub Nepraš, and Michal Cimala. These artists form the foundation for instinctively shaped axes onto which are linked other artists working with varying intensities in a variety of media. (A separate group of artists are the farthest “satellites” in Trafačka’s orbit and also those who were invited for short-term collaboration on the basis of their similar way of thinking or working, similar art, or a sense of mutuality.) Some of them form sub-groups on the basis of subject matter or media, while others form autonomous and impermeable – sometimes very specifically solitary or self-enclosed – worlds. The exhibition aims for this Piagetian system of “groups,” meaning semi-permeable units, to be reflected in the transformational concept of the exhibition itself, from which it should be clear that it is presenting a “cultural phenomenon”, which It is by necessity an inherently self-contradictory phenomenon, for it is simultaneously characterized by mutual interlinkages and by the impermanent and changeable nature of these linkages on a number of different levels.

Put simply, it is UNITY IN DIVERSITY, and it is what gives the old and the new Trafačka its unique identity. Somewhere in the background, unity in diversity is constantly imbued with the primal founding energy injected into the project at its start, back when it was not expected to survive for more than a few years.

The exhibition is accompanied by a bilingual publication with an introductory speech by Blanka Čermáková, Petr Vaňous, medallions of central artists by Noemi Smolik, Petr Vaňous and Magda Danysz, medallions by all exhibiting artists and an interview with founding members of the Trafačka Association Michal Cimala, Jakub Nepraš, Jan Kaláb and Blanka Čermáková. The author of the graphic design of the publication and the visual of the exhibition is Jiří Mocek.

Selected art works of the exhibition will serve to support the Low-Threshold Day Center Naděje U Bulhara, which cares for the disabled, people living on the streets and seniors in need of increased care. The cooperation of Trafo Gallery with Naděje is a three-year concept that we plan to further develop.

We thank the partners of the exhibition: Ministry of Culture of the Czech Republic, City of Prague, Canadian Medical, Art District 7, Transport Company of the Capital City of Prague, Radio Color, Radio 1, Kdykde.cz and Wine4You.