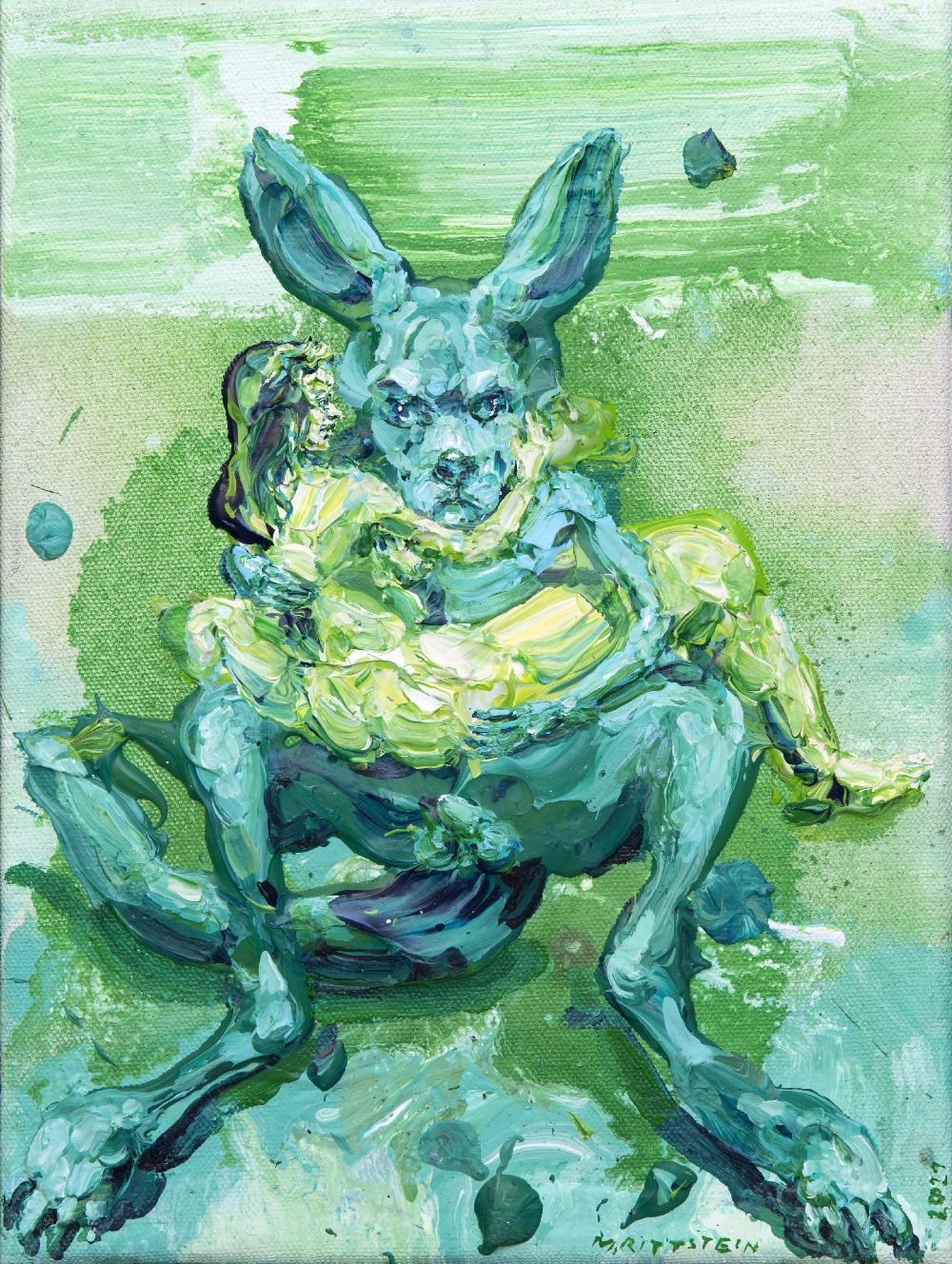 Michael Rittstein is one of the most active artists working in our country, regardless of the number of works he has created over the many decades of his creative life or the generation to which he belongs by virtue of his date of birth. His approach is systematic and based on a well thought out concept. It is the result of a storytelling passion stretching back years and a desire to record fleeting moments, bizarre tales that may have taken place in the world of humans or animals. He aims to materialise emotions he has personally experienced and which are linked with a compulsive need to be forever observing events taking place around that kickstart his imagination and stimulate his sometimes sly sense of humour.

The book Kangaroo Tarzan that accompanies the exhibition of the same name at the Trafo Gallery presents the last four years of Rittstein’s work as an imaginative documentarian of his travels to the cradles of our civilisation in time and space. As an admirer of historical events and their contribution to the development of humankind, he recently chose to travel to India and Mexico, and, in his memories, to Australia as the locus of his imaginary tales (the comics Kangaroo Tarzan) or simply as an attentive and empathetic viewer of situations and details taking place around him. Whether this involve garbage collectors, children playing on an Indian street, a resting tramp, a mechanic from a Mexican auto-repair shop, or the hunt for mammoths and other wildlife in prehistoric times, these fleeting fragments of ordinary human life that today and every day are played out around us and which we, caught up in the accelerated rhythm of time overlook, Rittstein selects as the main actors of his canvases, often with a careful study of movement that thus materialises the traces of these experiences with eternal validity.

With the same devotion and playfulness he turns to the micro-stories of various animal species of mostly Czech provenance, a kind of animal farm of the present. As a virtually lifelong resident of Brnířov, a village in Western Bohemia, of which he is a proud patron, he is surrounded by animals, which in his eyes and paintings possess respect, honour and properties comparable with human beings. As a humanist and Darwinist, Rittstein sees the importance of a balance being maintained between all living beings, and his paintings reflect this fact. A thousand and one movements and stories of a domestic cat, which are everyday inspirations, curious mice on a trip to a modern art gallery, women as intimate friends of the creatures of the kingdom of animals… all these form a significant element of his work and are inseparable from him. The sometimes grotesquely staged production of stories common to both humans and animals arising from Rittstein’s imagination are evidence of his pleasure in life and his love of fabulation.

The exhibition is accompanied by a bilingual publication with an introductory speech by Blanka Čermáková, summarizing the author’s approach and work from recent decades, an interview with the author about his painting approach with a look at personal history and a selection of works from the last four years. The author of the graphic design of the publication is Jana Vahalíková.