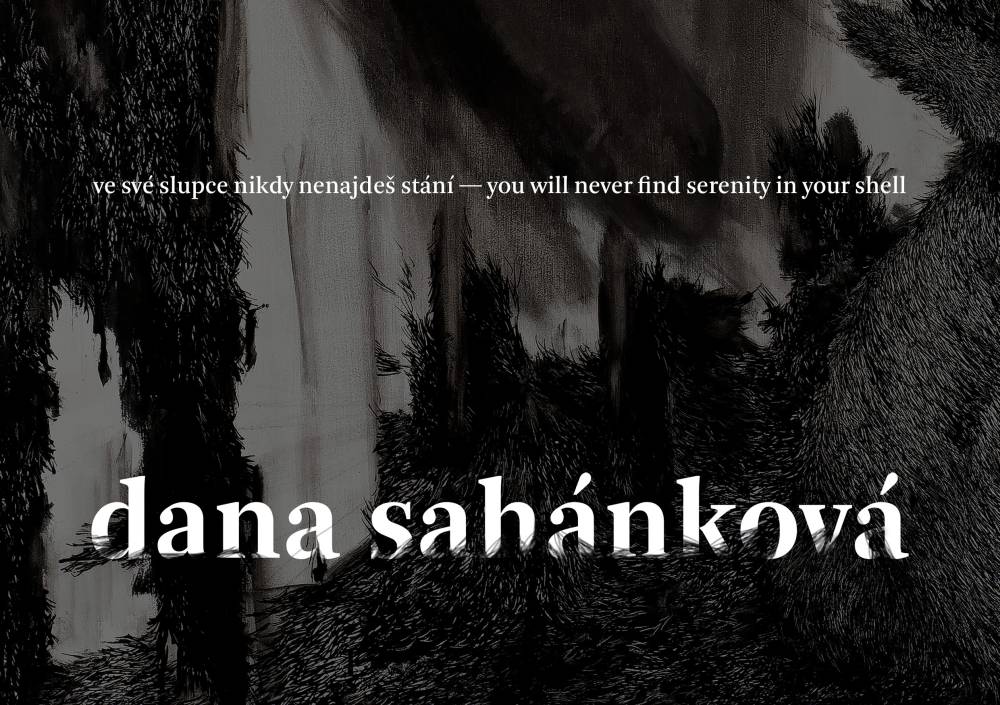 Dana Sahánková continuously works with the medium of large-format drawing. The title of her exhibition “You Will Never Find a Stand in Your Shell” is a modification of a quote from one of Mephist’s replicas. The modification consists in transferring the action from the third person (he) to the action of the other person (you). In the background of the project, one can feel the Faustian theme, which the author touches on in the longer-term visual thematization of time and memory. To express them, he has long used an arsenal of selected animals (wolves, dogs, deer, cats) in relation to the space, which is constantly changing. This allegorized relationship, which is a dynamic dynamic “interweaving” of the figures and their frames, is sometimes complemented by mythical characters with some unspecified mission (eg the returning dream figure of a little angel). Predators represented by elected animals are excluded from their dominant roles and become victims of passing time. Their bodies, full of aggressive gestures, disintegrate into fragments and are assembled into new wholes evoking a dreamy atmosphere, states of ecstasy, enlightenment or hallucinations. The “rippling space” itself is unreal, whose construction is constantly falling apart and collapsing, or changing as a result of an unknown mechanism (Bez názvu VII-I a Bez názvu VII-II, 2014-15). The viewer can often feel like an uninvited guest here. We dive into deep psychoanalytic situations in their polarization rawness, or into constellations, which in metaphorical abbreviation transcend the human scale not only in the physical level, but especially in the level of reflexive consciousness. By escalating uncertainty, the author reveals the reverse side of the systematized and rationalized world in which we live.

Dana Sahánková (born 1984 in Prague) graduated from the Prague Academy of Fine Arts in 2005-2011 (Drawing Studio by Prof. Jitka Svobodová). In 2008 she studied at the Ecole Nationale Supérieure d’art in Dijon and in 2009 in Veronika Bromová’s New Media II Studio (AVU, Prague). While still studying in 2010, her work was presented as part of the Start Up cycle at the Prague GHMP; in 2011 it was included in the balance project Czech Painting of the Generation of the Zero Years of the 21st Century in the Wannieck Gallery in Brno. In 2012, she became a finalist for the Critics’ Award, where she received the Audience Sympathy Award. Last time she exhibited independently at Kutná Hora’s GASK (Vertical Twilight Project, 2016) and participated in collective projects pOSTKONCEpTUÁLNÍ ANTIKONCEpCE (OGV, Jihlava, 2017; Galerie U Bílého jednorožce, Galerie Klatovy – Klenová, 2018), Otřesy (Galerie Halle 14. Leipziger Baumwollspinnerei, Lipsko, 2017) a Tangenty (Dům umění města Brna, 2019). This year, it will sit on the jury of the EXIT 2019 award. It has already exhibited once at the Trafo Gallery, in 2018 it participated in the OSM project.